The principles of social enterprise underpin much of what we do, and as a team we have worked with a number of charitable, not-for-profit and philanthropic organisations since 2008. 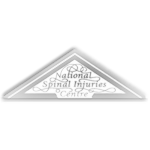 In 2011 we formed Big Media with a particular view to deliver solutions with a social purpose. We hit the ground running by building on 2 projects that had started life with support funding from SEHTA.

The first SEHTA project came under the ICE-T support initiative. As an extension project to the original ICE-T funding for working with Independent Age (see below), Big Media met with senior clinical staff at the National Spinal Injury Centre at Stoke Mandeville Hospital in Aylesbury.

The NSIC’s remit is to provide lifelong care for patients who go through their Centre. Providing education and support for people whilst an in-patient at the Centre was business as usual, but once patients left, the drop-off in the ability to provide support was exponential. The NSIC needed to look for appropriate ways to extend care and expertise beyond the Centre to help patients in their daily lives.

Proper cross-platform delivery was of high importance to the NSIC, so as well as being available on mobiles and tablets for many patients, some patients were limited to use of specific devices due to severe mobility restrictions.

The team at NSIC were attracted by the concept behind The Wellbeing Channel of providing online support information to Independent Age beneficiaries. The requirement to provide ongoing support, ideally through whatever devices their audience preferred to use, was strikingly similar for both Independent Age and NSIC. 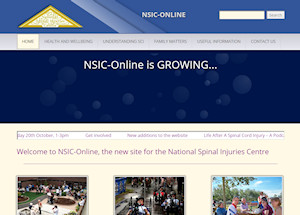 As world-leading experts in their field, the staff at NSIC were ideally placed to provide reliable, up to date information to populate the site.

As experts in cross-platform delivery, with our own Chameleon software designed to deliver the best user experience across different devices, Big Media were ideally placed to provide the framework and interface for delivery.

A great deal of work went on to populate the site from late 2012 to 2013 with content from the NSIC, converting PowerPoint presentations to readily available cross-platform web pages. Development and testing of NSIC-Online took over a year prior to launch early 2014. 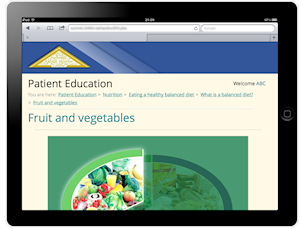 In spring 2014 the site was launched for use by patients and ex-patients, and to support their friends, families and healthcare practitioners. Site usage has grown month on month consistently since launch, and feedback has been very positive both from staff and patients.

The groundwork on health literacy has also highlighted the need for more interactive self-management and proactive education modules.  The aim of this next phase is to help people have greater confidence and independence, and become experts in their condition.

We have started out on the next exciting stage of creating more interactive learning and self-management support, building on the health literacy provided by the current NSIC Online resource. The aim is to create a full range of patient education quizzes and courses to help build knowledge and understanding around identification, management, prevention and treatment of secondary conditions.

We have just submitted an application to the Nominet Trust to see if we can win funding support to enable us to enrich the learning content, as well as develop the web app prototype – KIT (Knowledge, Information, Training) – to facilitate easier access both online and offline. You can see the video about the KIT project here:

The second of these was under the European TCares project umbrella. Following a review by senior management at Whiteley of a number of different project ideas from a range of providers, Big Media’s “Whiteley Village Channel” proposal was selected.

Whiteley Village – a retirement community in Surrey with over 200 residents, were struggling to manage the large number of calls and visits made to the on-site support team. Many of the questions were routine, and the question was how to alleviate the time pressure on the support team by exploring ways to encourage those with an aversion to technology to access information on-screen.

Big Media’s experience in delivery of internet services to include non-computer devices, such as mobiles and of particular interest in this case, TVs, was a compelling factor in our selection. 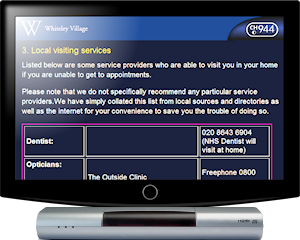 The proposal implemented by Big Media was to provide a community information channel. Residents with PCs, mobiles or tablets were able to access the channel via its URL in the normal way. In addition, a pilot was conducted providing access to the channel via their TV. A deployment of specific set-top boxes gave online access to those with internet, and offline access via USB to those without. Users could access the content via a channel number (944) on their set-top box remote.

The outcome:
The community channel was very well received by residents and their families further afield and overseas. Engagement with the channel was driven largely by the community aspect of residents being able to share information about where and how they lived, events in the village etc with relatives. But it also contributed to the requirement to alleviate pressure on support staff, with people helping themselves, and frequently their neighbours, look up information.

The decision was taken in 2012 to amalgamate the key information of the Channel into the main Whiteley Village website itself, which Big Media took over at that time and continue to work on together with the team at Whiteley.

In 2011 we worked with the charity WheelPower to provide an innovative in-room TV system for the Olympic Lodge Hotel at Stoke Mandeville. The original system used set-top boxes with internet connection to deliver a hybrid online and TV interface. The 50 set-top boxes were donated to WheelPower by Big Media, and installed during 2011. 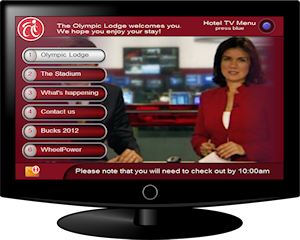 Whilst providing a rich interface as shown here, with menu options and the WheelPower branding overlaying the broadcast TV, poor TV signals and broadband speeds meant that the idea needed to evolve.

A new solution was drafted by Big Media in 2014 to allow content to be maintained easily, and deployment to the new TVs kept to a simple solution of using USB drives. This meant that the set-top boxes were no longer required, lowering the demand on both the TV signal and Internet services throughout the hotel.

The Teleform Partnership started out in late 2011 to build a solution to the problem of conducting effective Telecare home assessment visits. Big Media led the technical development of a cross-platform online form which could be used by care visitors to transmit details about a person’s condition and environment. 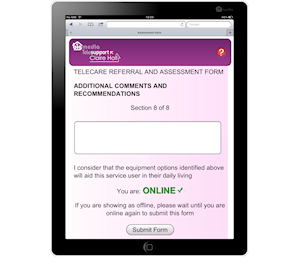 The work was self-funded by the partners as there was a shared belief that improvements in managing visit assessments would provide both a revenue stream as well as social benefit to people being cared for at home.

Part of the requirement was to ensure no patient confidential information was stored anywhere that could cause concerns with regulatory and confidentiality governance. The solution employed a lightweight online form system that could be used on iPads, mobiles and iPods, and would check whether the assessor was online before submitting.

You can see a video overview of the Teleform system here:

2010 saw us joining up with Independent Age under the SEHTA ICE-T initiative to deliver a project called “The Wellbeing Channel”. The main driver behind this project was to pilot the effectiveness of providing support and community information to a pilot group of Independent Age beneficiaries. 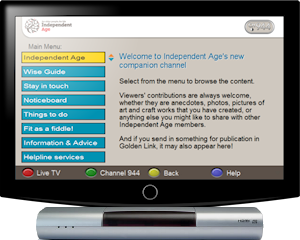 Whilst the content for the site was developed to work on a variety of devices, of key importance was the ability to deliver on TV.

Around 50 triallists were selected for us to work with, and the vast majority were provided with TV set-top boxes and other equipment to enable them to access the material. Other members used PCs to access the same content and provide feedback.

Following an approach in 2009 from the former Chair of the U3A, we worked on developing a proposal entitled “Time in”. The intention was to help promote mental wellbeing and provide support information to U3A members. 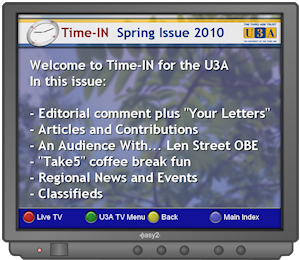 We were approached by Len Street OBE, former Chair of the University of the Third Age, to explore ways of providing more information, engagement and fun to U3A members. The purpose of the idea was to help motivate, support and engage members of the U3A, as mental activity and wellbeing was seen as central to good health in older age.

Building on our in-depth experience of internet on TV, Len recognised that the ability to combine on-screen activities and information with familiar technology like the TV could have a huge positive impact for older, less technology-aware individuals.